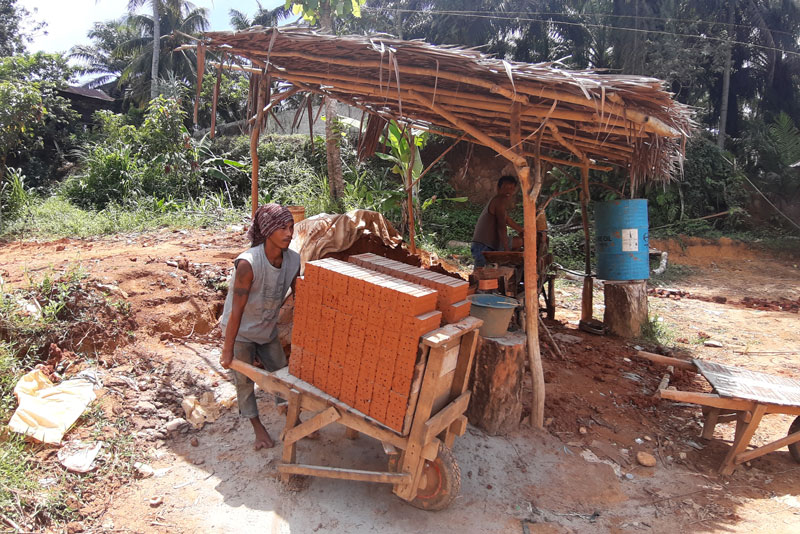 Samsul Bahri sat dumbfounded in front of his house, his dream of a better future slipping through his hands. He hadn’t hoped for much; just to have a decent place to live with his wife and two children.

Bahri, who has been disabled since birth, had applied in vain for a government home rehabilitation program  But this year, his name had finally appeared on the list of potential beneficiaries for the Different Home Rehab program. But  the local authorities canceled the assistance because he did not have the money to cover the needed rehabilitation.

Indonesia ratified the Convention Concerning the Rights of Persons with Disabilities in 2016. The law confirms that people with disabilities have the same rights as any Indonesian citizen, including the right to government assistance programs.

Assistance comes under the purview of the Ministry of Social Affairs.  Among those programs is direct cash assistance of Rp. 2.4 million and 10 kilograms of rice distributed through Perum Bulog.

To receive the assistance, people with disabilities must have an Electronic Identity Card and be registered with the Social Welfare Integrated Data (DTKS). That registration qualifies them for aid.

This program covers the purchase of materials worth Rp. 17 million, and Rp. 3 million to pay workers who do home rehabilitation. Bahri would have to supplement the grant money and pay the labor costs in advance, which he says is an impossibility.

“I don’t have that much money,” 43-year-old Bahri said. “It’s hard even to spend money for food.”

Bahri has lived in Seluma Regency for more than 11 years.  He bought a flat piece of land 10×20 meters wide, partly in a swamp, and surrounded by oil palm plantations. The soil needs to be compacted before any construction can begin. For now, he is paying for the land in installments.

“(This land) has not been paid off, but there is already a land certificate,” he said.  Bahri built a plank-wall house of 4×6 meters. The ground floor has two rooms: a living room at the front and a kitchen at the back where Bahri, his wife Umainah, his 9-year-old daughter, and his disabled son sleep.  He did qualify for a grant to build a bathroom, but the program provided only a few bricks, two buckets of sand and a latrine, but no material to build the walls or a door.

Bahri was born with only two toes on each foot, the result of a genetic condition that has also affected his youngest son. A brick maker by trade, he also works as a casual labourer. He makes about  Rp. 1 million a month, which covers his motorbike installment of Rp. 730 thousand, food and other necessities.

The Home Rehab program is not the only one that has failed to come through for Bahri. He also applied for venture capital assistance several times as he has the ability to make bricks, which he hoped would qualify him for  capital assistance to purchase brick-making tools.

“When the aid was distributed, I came to the Social Service. I asked why I couldn’t get help,” Bahri said. The officer told him there was no record of his application, even though he had submitted it several times.

“My family and I never received other assistance, including for COVID,” he said. “I seem to skip every kind of aid.”

The cancellation of Bahri’s registration with the Home Rehab Program was caused by his having insufficient funds to complete the project, said Arwan Santori, Head of RT 07 RW 02 Babatan Village, Sukaraja District, Seluma Regency.

“If he only relied on the budget allocated by the government . . . the funds would not be enough,” Santori said. He would need some Rp. 17 million to complete the building.

Bahri’s village received Home Rehab program funds during the last fiscal year for six units, whereas his building has 10 units in need of repairs.

“We have reported Samsul’s data, but that only determines whether he’s eligible for help or not,” Arwan said. The actual funding, he said, comes directly from the government.

Looking for a support system

As a person with a disability, Bahri said he felt like a “wasted” person who found it difficult to secure friends and supportive parties around where he lives.

He was determined to seek a supportive  community. A friend invited him to join the Mitra Masyarakat Inclusion (MMI) organization, which provided a wealth of information for disabled people fighting for their rights.

In this “home-like” environment, Bahri said he feels free to share his concerns. Since joining MMI, he has received assistance with a squat toilet in a closet and sand for a temple.

The battle for resources remains difficult, said MMI Chair Irna Riza Yuliastuty. As a member of the  Indonesian Women’s Coalition (KPI), she said she had documented a pattern of favoritism from the local to the regional level.  People with disabilities think that merely filing their application suffices, but their application needs to be monitored at the village, sub-district and all the way up to the Ministry of Social Affairs.

“These processes must be monitored continuously if persons with disabilities want to receive government assistance,” she said.  In the absence of data on the disabled, this process is problematic.

“Knowing the exact number of people with disabilities will make it easier for the government to provide assistance and distribution,” Yuliastuty said. Moreover, the absence of assistance prevents the disabled from being able to help themselves.

“Many people with disabilities can be independent,” Yuliastuty said. “But they need assistance, capital assistance.”