Marriage equality in Asia: Can Japan be next? 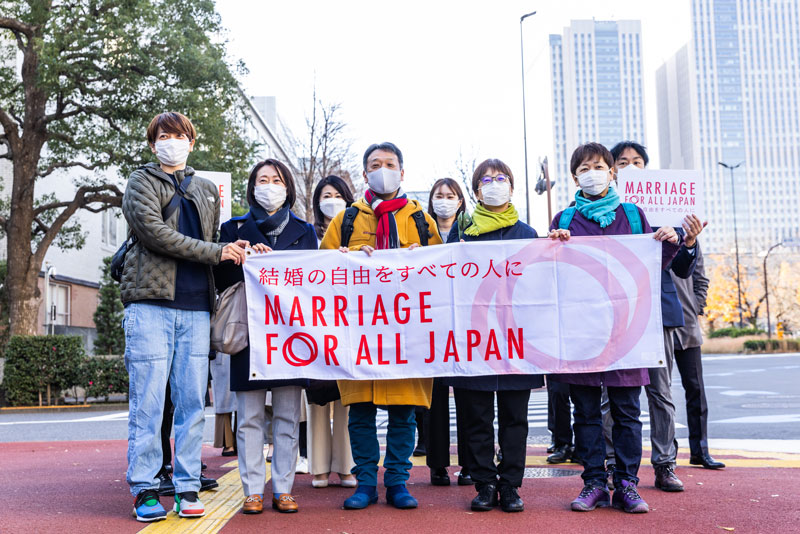 TOKYO — A March 2021 court ruling that same-sex marriages are constitutional has given same-sex couples a glimmer of hope and shaken up the battle for marriage equality in Japan.

“When our marriage registration was denied by the ward office,” says Yoko Ogawa, a lesbian in Tokyo. “I remember feeling as if we were faced with an impossible task”

The Sapporo District Court ruling has given couples like Ogawa and her partner a ray of hope, she says. “(And) for the younger generation as well.”

The ruling, the first of its kind in the country’s history, came at a landmark moment – just before the 2020 Summer Olympics Games, which Japan was hosting.

The Sapporo District Court ruled that the law, which does not recognize marriage for same-sex couples, is “discriminatory treatment based on an irrational basis,” concluding that it violates the equality principle guaranteed by Article 14 of the Constitution.

This ruling does not immediately change the law, however, since parliament must act to make marriage equality a reality in Japan.

While Taiwan became the first country in Asia to recognize same-sex marriage in 2018, Japan has yet to follow suit. It is also the only member among the Group of Seven without such law.

On Valentine’s Day 2019, Ogawa and her partner of 30 years, Chizuka Oe, were among 13 same-sex couples in four Japanese cities to sue the government for the right to marry.

The number of plaintiffs in the class-action lawsuit has since grown to more than 30, and the battle continues in Sapporo, Tokyo, Nagoya, Osaka and Fukuoka.

In Tokyo, Ogawa and Oe have run a community space for lesbian and bisexual women for almost three decades and staff a support hotline for LGBTQ people.

The calls and messages they receive illustrate the harsh reality of living as a sexual and gender minority in Japan, Oe says. Students struggle with bullying at school and transgender people’s gender identities aren’t respected at the workplace.

Japan’s gender norms must change if the lives of LGBTQ people are to improve, Oe says. She hopes her fight for marriage equality will help make that shift.

“Society’s gender norms expect men and women to behave a certain way,” Oe says. “Those (norms) often extend to marriage being perceived as a union between a man and a woman.”

The lack of choice offered to same-sex couples is a clear violation of their rights, say Ogawa and Oe, who hope the lawsuit will provide an opportunity to question and reimagine such norms.

“Marriage is not even an option for us,” Ogawa says. “We cannot make it to the same startline as everyone else. It makes me feel as if we are second-class citizens.”

Same-sex Japanese couples like Oe and Ogawa not only cannot legally marry, they do not qualify for survivor’s benefits, property inheritance, and joint custody should they have a child. If one partner is a foreign national, they are ineligible for a spousal visa, creating barriers for them to stay in the country together.

Makiko Terahara, an attorney representing plaintiffs in Tokyo, says they are aiming to take their case up to the Supreme Court.

“It may be difficult for a district court ruling to persuade parliament to take action,” Terahara says. “If the Supreme Court rules it unconstitutional, however, that will almost guarantee law reform.”

Plaintiffs in the Sapporo case appealed the district court ruling, and hearings at the Sapporo High Court began in December.

The plaintiffs argue that the current law violates their constitutional rights to equality as well as the freedom to marry.

In denying such claims, the Japanese government argued that the “Constitution did not expect same-sex marriages,” and therefore their inability to marry is not based on discrmination.

The government also states that the purpose of marriage has traditionally been reproduction. Moreover, the government claimed that homosexual people can still legally marry under the current law as long as it’s in a heterosexual relationship.

A 2019 study showed that more than 60 percent of Japanese support same-sex marriage. However, the leading Liberal Democratic Party has refused to deliberate such laws in Parliament.

Prime Minister Fumio Kishida, in line with past party leaders, has said that “making marriage equality into law requires extremely careful consideration as it is an issue that touches on the foundation of family values.”

While legislation lumbers along at the national level, in recent years, local governments nationwide have moved to adopt ordinances supportive of LGBTQ rights.

Same-sex partenership ordinances publicly acknowledge same-sex couples as in “relationships equivalent to marriage,” and qualifies them for certain family benefits and services within the municipality or prefecture.

First enacted in Tokyo’s Setagaya and Shibuya wards in 2015, these ordinances have since been adopted in more than 150 local governments across the country.

Same-sex partnerships do not hold any legal weight, says Ken Suzuki, a law professor at Meiji University. However, they were groundbreaking for LGBTQ rights in Japan.

“Because the national government determines laws pertaining to families, same-sex couples virtually did not exist in the public sphere,” says Suzuki, who also facilitates an organization calling for local governments to adopt same-sex partnerships.

“The partnerships are significant,” he says, “in that they gave definite proof that same-sex couples exist in society, and will surely become the first steps in creating legislation.”

Tokyo Governor Yuriko Koike announced last year that the partnership system will be adopted in the rest of the prefecture. This move is expected to greatly increase the total populations in local governments with same-sex partnership ordinances to more than 50 percent of the country, and Suzuki says the momentum is growing in favor of making marriage equality a reality.

“Same-sex partnerships are the result of local governments doing what they can while the national government does not offer any legal protections,” Suzuki says. “As its inadequacies become more apparent, it will only make legislation the obvious next step”.

Minoru Ichihashi and Yae Takeda, who joined the lawsuit last year in Tokyo, recently purchased a home for themselves and their daughter.

“We wanted a place where we could make our final abode,” says Takeda.

Since the law does not allow them to marry, uncertainty also looms over their family.

“If something were to happen to Yae, I’m not entitled to any rights to this house,” says Ichihashi. “Legally, we’re complete strangers.”

Ichihashi, who is a transgender man, and Takeda, a cisgender woman, are also the only heterosexual couple among other plaintiffs who are legally considered a same-sex couple.

Under Japanese law, transgender people must undergo surgery to remove their reproductive organs in order to change their legal gender, a requirement Ichihashi has not fulfilled from a variety of concerns including impact on his health. The controversial law has drawn criticism as a violation of human rights.

Not all transgender people need to undergo a radical medial operation to feel comfortable with their bodies, Ichihashi says. However, for those who seek to legally marry their heterosexual partners, some see undergoing the procedure as the only way.

Judges and government need to understand that these are real issues transgender people face in Japan, he says.

Following a court hearing last year, Takeda told reporters, “We’re past the turnaround point of our lives, and there’s no time not to take action.”

Takeda would like to see the change in the law during her lifetime.

“We don’t know how much time we have left in our lives,” she says “I want people to know that we are struggling every day, and we can’t just tolerate it forever,” she says.

“When we are legally married, I want to hold my partner’s hand when we’re outside, or introduce him to my coworkers as my partner,” Takeda says. “A law change wouldn’t immediately take away society’s discrimination about sexual and gender minorites, but I think it will be a good step in the right direction.”