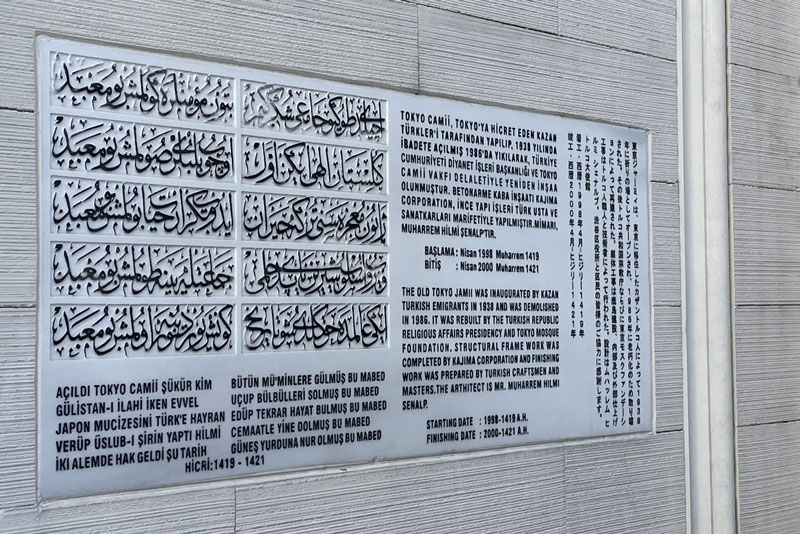 TOKYO – The posting of Hawa Abdullah’s father to Taiwan when she was a girl was a blessing.

Now 57 years old, the Japanese language teacher was intrigued by Taiwan’s mix-and-match approach to religion: “The father could be a Buddhist, his daughter a Catholic and so on,” she says.

As an adult traveling across Asia, complete strangers, mostly Muslims, would help her, making her more interested in Islam.

When she was 30, Hawa’s inquiring mind led her to make the Muslim profession of faith, shahada, before converting to Islam at a mosque in Borneo, Malaysia – another country where Muslims, Buddhists, Christians, and Hindus live side by side.

In contrast, in the relatively homogenous and religiously unaffiliated Japan, this simple procedure demands a great deal of courage for Japanese women like Hawa. Conversion requires a complete change of lifestyle, right down to fashion sense for women who start covering their head with a hijab. The hijab headscarf makes them suddenly visible — a heavy price to pay for their newfound religion.

Ethnic Japanese Muslim women face the double challenge of being a Muslim and a woman in Japanese society where gender bias and xenophobia still exist against ethnic and religious minorities.

Some 43,000 Japanese living in Japan identify as Muslims, according to a U.S. State Department’s report, 2020 Report on Religious Freedom: Japan.

This figure may well grow, according to a U.S.-based Pew Research Center report, which shows that Muslim populations worldwide will grow by 25 percent in the next two decades.

At the Tokyo Camii in Yoyogi, the biggest mosque in Japan, roughly 12-17 people convert to Islam every month, says Muhammet Rıfat Çınar, the mosque’s imam, and a Turkish citizen.

“About one-third of these conversions are due to marriage with a Muslim,” Çınar says. “Another one-third are those who research Islam on their own and decide to convert.” The remainder are influenced by Muslim friends and acquaintances.

Incidences of discrimination against Muslims on a global scale usually follow the news cycle. Physical or verbal attacks can be vicious, after catastrophic incidents such as 9/11. In non-Muslim countries, they can result in police surveillance of Muslim minorities.

Attacks also come from cyberspace, as in the recent case of an Indian GitHub app called Bulli Bai, a derogatory Hindi phrase for Muslim women, which encourages men to bid on Muslim women at a fake auction. The app has since been removed.

Junko Hayashi is a Tokyo-born 42-year-old Japanese Muslim woman and human rights attorney. She is the only hijab-wearing member of the Japan National Bar. She converted to Islam while studying in Boston in January 2001 and started wearing the headscarf soon after.

Hayashi could not have picked up a worse time to return to Japan and look for work, she says. Just eight months after her conversion, 9/11 happened.

“I had some interviews lined up but they didn’t go well,” she says. “Once, I was told by the interviewer everything was fine, except that he wasn’t sure about my hijab.”

Even in parts of the world like Japan with no past experience of an atrocity by religious radicals tied to Islam, Muslims face challenges.

In September 2020, the Beppu Muslim Association in Oita Prefecture met with resistance from residents when they revealed plans to build an Islamic cemetery in Hiji Town, Oita Prefecture. The cemetery is yet to be built.

Hijab-wearing Japanese female Muslims who spoke to me for this story acknowledged systemic racism in Japan against Muslims and foreigners. Police had stopped and questioned many of them on the street at least once.

“I had just got out of a meeting of the Japan Muslim Association and was carrying some heavy textbooks when the police stopped me,” Hawa says They wanted to search her bags but let her go when they realized she was Japanese.

Another Muslim woman, who declined to give her name, was not so lucky. In June last year, the South Asian woman, a client of Hayashi’s, was subjected to verbal and physical harassment by a disturbed Japanese man in a Tokyo park. The man called her and her three-year-old “killers” after alleging that the child had kicked his son.

The harasser later posted a message on his Twitter account, insulting Islam and Quran, and continued to stalk the mother and the child online. He published their address, garnered from the Tokyo Metropolitan Police who had interviewed the woman and the child for five hours non-stop.  The woman is now suing the police for breach of human rights.

Strong prejudices, especially about Muslim women, are hard to break. In Japan’s homogenous society, some Japanese Muslim women face pressure from immediate family as soon as they convert to Islam.

Hawa says her father’s first reaction upon learning that his daughter had become Muslim was to ask, “Why?” Having worked as an expat in Muslim-majority countries like Indonesia and Malaysia, her father’s impression of Muslim women was that of an uneducated and weak person, she says.

He hated religion and “despised our Indonesian housemaid. He saw her sajda [act of kneeling and bowing during prayers] as some kind of subordination,” Hawa says. “He neither understood nor accepted me until the day he died.”

When Meiji Restoration in 1868 made the emperor the absolute power, the Japanese got rid of many Buddhist gods. The new Japan was to be built on a sacred foundation with a national ethos and a religious rationale. The state religion, Shintoism, was allowed to flourish so that a strong central system could be in control.

In today’s Japan, the religions of Shintoism and Buddhism, count the greatest number of adherents but carry little weight beyond the ceremonial. They rarely dictate everyday life.

“(The Japanese) see religion as a more casual, culturally based sort of phenomenon,” according to a 2017 report by Georgetown University’s Berkeley Center for Religion, Peace and World Affairs “Less than half . . . identify themselves as active members of a religious group.”

Hayashi’s parents expected her to eventually sour on Islam, especially after 9/11.

“Their attitude was more like, ‘She’s really passionate about this [new interest called Islam]’,” their daughter says. “Let’s wait until she calms down.”

But Hayashi became an even more passionate advocate of religious freedom and tolerance enshrined in the Japanese Constitution. She now works as an attorney and defends Japanese nationals and foreign residents who are discriminated against based on their religion.

Lacking the support of a robust ethnic Japanese Muslim community, visibly religious converts are even more vulnerable to criticism after every tragedy. Almost 14 years after 9/11, in 2015, Islamic State kidnapped and killed two Japanese journalists, and Japanese Muslims once again came under a spotlight.

The age-old debate on the violation of women’s rights under the disguise of Islam resurged after the Taliban’s takeover of Afghanistan and barring of women and girls from public life.

Vice President of Japan Muslim Association (JMA) Kyoko Soda converted to Islam after a 1998 visit to Indonesia to gain expertise in the Indonesian martial arts, pencak silat.  Soda was living in the U.S. when  9/11 happened. Although she didn’t wear the headscarf and avoided criticism in the aftermath of the tragedy, she observes a difference between xenophobia in Japan compared to the U.S.

“Japanese xenophobia [is] more targeting Koreans [and] Chinese rather than Muslims, because we are not so visible in Japanese society,” she says.

JMA, the best-established organization for Japanese Muslims, is usually the first port of call for the 200-plus families with such issues such as marriage, raising kids, and getting out of poverty. Single members attend lectures on the Quran in Japanese.

“Japanese society basically marginalizes not only Muslim women, but all women, who are ‘non-cis-hetero-male’,” Soda says.

World Economic Forum’s Global Gender Gap Index for 2021 placed Japan last among OECD countries and 120th out of 156 countries in gender equality in politics, the economy, education and health.

Mature adults with years’ of experience living as Japanese Muslims, Hayashi, Hawa, and Soda know their constitutional rights. When they encounter religious harassment or abuse, they ignore the perpetrator or fight for their rights. Or in the case of martial arts expert Soda, with her fists, if necessary.

Hayashi is married to an American Muslim whose parents also chose Islam. Her husband, a Japanese man who converted to Islam at the same time as she, fully supports his wife’s religious practice.

“As a lawyer, I have seen a lot of (abuse) cases,” says Hayashi. “The husband suddenly becomes very pious… Some men use Islam to do whatever they want, including even taking more than one wife.”

The wives are financially dependent on husbands who may not let them go out to work because they think it’s against Islam for a woman to do so. If the Japanese Muslim wife objects, the husband accuses her of questioning her faith.  The wife has to remain silent about the oppression in order not to betray the community and break its collective line of defense against the danger of Muslim hatred outside the community.

Kyoko Nishida, a 50-year-old Japanese Muslim divorcee with three adult children, works as Tokyo Camii’s Publishing Director. Unlike other Muslimas interviewed, Nishida doesn’t wear the headscarf, so she is in a unique position when someone nearby criticizes Muslims without knowing that she is one of them.

“Islamophobia is a rather useful phrase for some Muslim men, but it doesn’t describe accurately the difficulties Muslim women face,” she says. “I don’t see a difference in attitude between a non-Muslim throwing an egg at a Muslim woman and a Muslim man with misogynistic and patriarchal tendencies oppressing a Muslim woman.”

Whenever lawyer Hayashi intervenes on behalf of a Japanese Muslim woman and tries to talk to the husband, they look down on her, she says. These men should understand they can’t simply import their customs to Japan, she says and the Muslim community in Japan has to realize it has to change.

“Our best shot are the imams,” she says. “[These men] listen to the imams, who are often from the same country as them.”

JMA’s Soda agrees that Muslim women face more hardship at home with their Muslim-born non-Japanese husbands than they face where more often they pass as “foreigners”.

“We know how to handle the hardship in Japanese society,” she says. “Or at least, we can find a way to get out [of] that, because we speak and understand [the] Japanese language.”

“Japanese tend to praise “patience” [“sabur” in Arabic], but “sabur” does not mean ‘endure without doing nothing’,” Soda says. According to her, sometimes Japanese converts “misunderstand this concept.”

However, when it comes to the Muslim-born non-Japanese husband’s behavior, Soda says, it is hard to understand immediately which behavior is not Islam but misogyny culture from their homeland.

Nishida agrees: “We have a phrase called ‘kanninbukuro’ [bag of patience] in Japanese. But even a bag explodes if it takes in too much.”