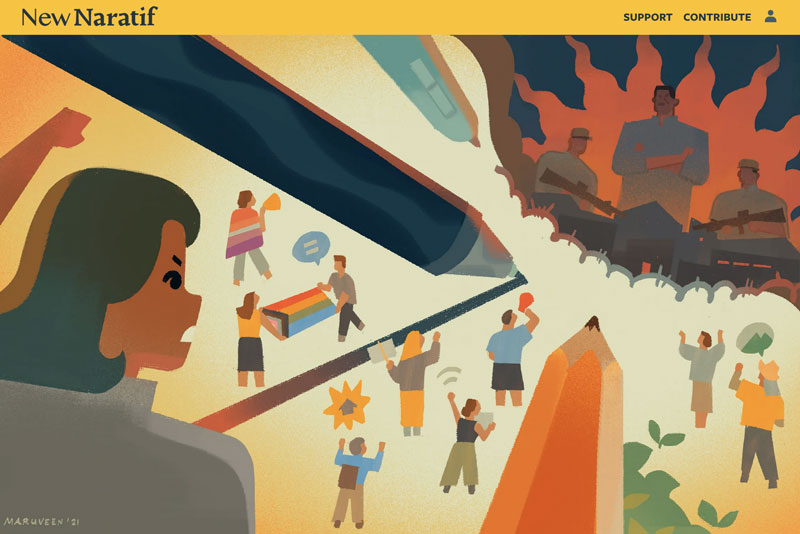 After weeks of reporting on palm oil extraction alongside an international correspondent, Febriana Firdaus, an acclaimed journalist, was left without a byline on the final article. It went on to win a journalism award.

This was not the first time something like this had happened to Firdaus. On another reporting stint in  for an international outlet, she had also been eliminated from the byline.

“Most of the foreign journalists [who come] here…don’t really value local journalists,”  Firdaus says. “Journalists like us, that [can] do the job . . .have the context to explain them, but there was no culture of recognition.”

Failing to credit local journalists results from the parachute journalism typical of much international coverage of Southeast Asia. Such coverage relies heavily on foreign correspondents. “(They use) local journalist with knowledge and connections who may not receive any credit on the final product.” says Firdaus.

Burmese-American journalist Aye Min Thant criticised CNN’s international Clarissa Ward for irresponsibility during a military-sponsored trip to Myanmar where local sources were detained after talking to her. Moreover, none of her reporting contained anything different from what local reporters were already covering.

Singapore is often made into a caricature in international publications, says Singaporean journalist and social activist Kirsten Han.

When local journalists are sidelined from reporting on Southeast Asia in  international publications, the result is reductive and incomplete coverage of this diverse region. International news outlets, beholden to rapidly-changing news cycles, readership interests and the pervasive practice of parachute journalism — do justice neither to local journalists nor their readers.

In a 2020 research study on media freedom in Southeast Asia, conducted by New Naratif, media workers stressed the importance of publishing more Southeast Asian stories in their pursuit for greater media freedom in the region. However, many journalists have found that pitching these stories and getting them published in international outlets has been mired in difficulties.

Many international outlets use “country quotas,” said one research study participant, imposing an informal limit on the number of stories they publish on a certain country.

The problems with pitching

Asia-based journalist  Nithin Coca, who has written for outlets like Al-Jazeera and Financial Times said that much of the difficulty in pitching stories on Asia to international publications lies in the need to explain the most basic details about the country..

“Your pitch [to these outlets] has to be stronger because . . . you have to explain why it’s important,” Coca said. “If you have to include all that extra information in a pitch, It’s more difficult to talk about what the reporting is going to be about.”

These difficulties are even more acute when editors are based in London or New York, or Sydney, he said. “(They) have even less understanding of the region.”

When foreign correspondents are involved in the process, coverage often suffers.

As part of  Firdaus’s reporting about palm oil extraction in West Papua, a salient issue that emerged was malnutrition — which often disproportionately impacts women and children in the community. However, these aspects are often overlooked by international correspondents.

“If you send a male journalist, they will focus on talking to the men,” says  Firdaus. “So we need to get the other story about what [happens] with the vulnerable community like women and children. So that’s my speciality.”

When these nuances and complexities are omitted, they perpetuate singular narratives about Southeast Asian countries, especially when filtered through narrow lenses that can stereotype entire countries.

“(Correspondents) fail to understand Indonesia as a whole,”  Firdaus says. “They don’t understand that Indonesia right now, for example, [is occupying] West Papua. They’re only interested in the topics of terrorism and disaster.”

“If we are perpetuating narratives about war, disaster, poverty and disease,” Parthasarathy says, “we are essentially representing a place to be a single narrative.”

“I worked with an NGO that worked with smallholders, indigenous smallholders, and they are all for palm oil, but we don’t necessarily hear that point of view,” she says. “You need to show . . . why are they for palm oil . . .  But are you really speaking to people [whose] livelihoods depend on it?”

Understanding the complexities of the issue is very complicated, Rosli says. “That is not going to be an easy story. And they shouldn’t make an easy story.”

The future is local

The way to improve reporting on Asian countries lies in hiring local journalists who are closer to the story, says Parthasarathy.

“The media industry really needs to reassess whether someone being closer to the story adds more nuance, adds more historical context, adds more unique source access,” Parthasarathy says. “I would argue that that only adds more credibility to the piece of journalism.”

“There are so many more English-speaking local journalists in Indonesia that are reporting and pitching stories,” notes Coca. “And that wasn’t nearly as common in 2015. So in that sense it’s positive to see more Indonesian bylines in the New York Times, or even in Reuters [and] different publications.”

This change comes along with increasing demands for democratisation amongst the new generation in Southeast Asia.

“A new generation of (Indonesians) have had a chance to be educated and grow up in the social media era,” Coca says. “This is the first kind of post-authoritarian generation that grew up most of their lives in a democracy… There are a lot of younger people, a lot of women, a lot of people from different parts of Indonesia.”

Increasing demands for democratisation have also led to a flourishing independent media scene, where local journalists are able to tell their own stories, on their own terms.

In countries like Cambodia where mainstream media is heavily controlled by governments, smaller digital outlets like VOD, VOA and RFA  have emerged— helped by the fact that there are more than eight million people using the internet.

Similarly, in Indonesia, host to the world’s second-largest number of social media users, online news sites are being ranked as some of the most popular websites. For Southeast Asian journalists, the burgeoning independent media scene injects a note of optimism for better coverage of the region.

“We [need to] have a very strong independent media in the region,” Firdaus says. “Then we can influence the final product. Because we don’t [have to] just follow the agenda from the media in the global north.”

Growing local and regional publications is also paving the way for more transnational stories and solidarity.

“In the last couple years,” Nithin says, “I’m starting to see . . . civil society movements are starting to connect and discuss with each other.”

Independent regional outlets like New Naratif are growing and investing in Southeast Asian communities and journalism by giving opportunities to local media workers to tell their own stories.

However, these positive developments in the independent media scene will not happen overnight, or without mass public support — especially given the difficulties of sustaining them.

Building local independent media outlets in Southeast Asia have been rife with government authoritarianism and lack of funding. Yet, independent outlets like New Naratif, Malaysiakini and Luat Khoa have also seen optimistic reception to their coverage.

Although the future of local journalism in Southeast Asia remains laden with uncertainty,  independent media outlets are creating alternative stories, narratives and futures that spell out hope for local media workers and better coverage of the region.