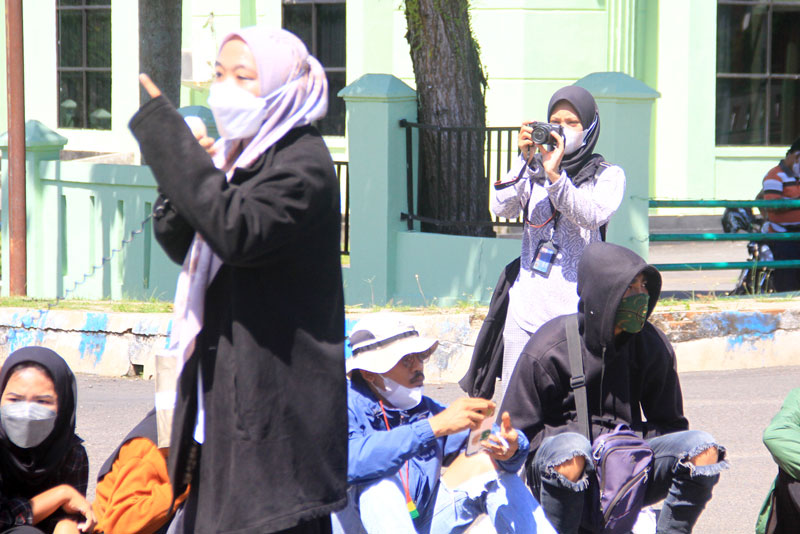 Lisa Rosari graduated from the Journalism Study Program University of Bengkulu, and was certified as an intermediate journalist by the Indonesian Press Council in 2013. She has now been working as the only female journalist in local media, and for more than 10 years she has not been promoted.

Only her passion for journalism has kept her in a job that pays less than Rp 3 juta, which barely covers her food, much less her other basic needs.  She must take on extra work, such as looking for advertising, to be able to pay her bills.

In the meantime, a male classmate has become an editor. And younger male colleagues have already got the editorial position.

“Being a journalist allows me to learn many things,” Rosari said. “But, unfortunately, women have fewer opportunities to be promoted to the editor level.”

Even as a member of Independent Journalists Alliance (AJI), Rosari said, the competence certification also does not help a woman’s chances of promotion.

“At first, I didn’t protest when I saw the news put women as objects of clickbait and seksis,” she said.

Rosari is not alone in being reluctant to protest either her organization’s treatment of women or her treatment as an employee. Ressita Kusuma, a reporter at a local television network, also never complained about her salary, additional duties, and lack of promotions. She realized that if she protested it would endanger her job.

She did not join professional organizations because she saw that competent women had few opportunities.

“I wanted to join an education training program, but it seems it (didn’t improve)  my career path,” Kusuma said.

Rosari and Ressita are typical of female journalists in Bengkulu, a small town on the island of Sumatra with a population of two million.

A survey conducted by the Bengkulu City of Independent Journalists Alliance in 2021  found that of 29 female journalists in Bengkulu, only five have primary certification in journalist competencies. And none occupy the position of editor-in-chief. Their careers have stalled as news reporting coordinators. Some have been transferred to other divisions, such as marketing and office management.

The Indonesian media industry is dominated by men.

Representation of Women in the Media

The Editor-in-Chief of the women’s publication Magdalene, Devi Asmarani, said that elements of sexuality or sexual objectification still dominate the portrayal of women in the Indonesian media.Unlike men’s coverage, women in the news are portrayed in terms of sexuality rather than achievement. Take a recent headline on a story about women in positions of power: “Here are the Five Most Beautiful Regents and Mayors in Indonesia.”

Media stereotyping reflects societal attitudes, Asmarani said. “There is sexism in conversation,” he said. “Women are ‘sensitive,’ men are more ‘rational.’ The girl who comes home (late) at night would be labeled as a ‘bad’ girl.”

Women are seen as the weaker gender, judged mainly from their appearance, Asmarani said. “The increase of conservatism in Indonesia has strengthened (this attitude) because of religious teachings, which are more rigid and harsh.”

Patriarchy Versus Women’s Leadership in the Media

Research conducted by the Indonesia Association for  Media Development (PPMN) in 2021 revealed a half dozen major obstacles to women gaining leadership positions in the media. Socio-cultural, corporate and  organizational structures are among the major stumbling blocks women face. However, lack of confidence and inadequate career training play a part.

Women in Indonesia began to work in the media in 1912, with the establishment of Soenting Melayu, a newspaper dedicated to women’s issues and run by Rohana Kudus from West Sumatra. Known as Indonesia’s first female journalist, she was awarded the title of national hero in 2018. Soenting Melayu treated women and men equally, including in political and criminal matters. Soenting Melayu inspired women to enter journalism in Indonesia. In 1925, Wadak Siti Soendari became the editor of the newspaper Wanita Swara.

The work of Rohana Kudus and other female journalists at that time used the media to fight patriarchy and colonialism, said Titiek Kartika Hendrastiti, senior researcher of gender and development from University of Bengkulu (UNIB).

“There should be a critical awareness,”  Hendrastiti said. “Seizing or occupying a position should be based on the achievements.” Those achievements should also include the barriers they have overcome.

But only a few Indonesian media allowed women to become leaders. Hendrastiki said.

Women must make a big leap by building their media to bring inclusiveness in the newsroom,  said Hendrastiki as Luviana did at Konde.co, Najwa Shihab with the Narasi platform, and Devi Asmarani and Hera Diana at Magdalene.

Konde publishes articles from the perspective of women and other underrepresented groups. Like Magdalene, a women-focused publication, provides content and perspectives that are inclusive, critical, empowering, and entertaining. Konde also channels the voices of feminists, pluralists, and progressive groups. And Narasi TV is a space for people to share ideas and compete with ideas that are oriented towards idealism and pluralistic, critical, and tolerant values.

The Importance of Women’s Leadership in the Media

“The press can promote the high quality of democracy by giving attention and space to citizens, voicing the voiceless,” Mulia said, “including women, minority groups, people with disabilities, and others.”

Research by PPMN and Atmajaya University Faculty of Communication Sciences, Jakarta, in 2020 shows that only three in 10 journalists who work in the Indonesian national media are women.

The lack of female journalists in the newsroom has contributed to a gender bias in reporting,” said Mulia. “Men who are gender-unfriendly will write about women’s issues based on their lack of perspectives,” she said “Vice versa, the women who lack knowledge of gender equality would contribute to gender-unfriendly reporting.”

In addition to having a poor record in hiring women, the media use relatively few women as sources.

“The media don’t even know women experts or sources because they are unaccustomed to thinking that women’s voices need to be heard and noticed,” Mulia said. “This is a chronic problem of gender inequality that exists in society. But, unfortunately, we and many others are still not aware of the existence of this disease.”

Female journalists need to be protected and supported, Mulia said, so that more of them will move into leadership positions.

To make a permanent change in media attitudes to women, there need to be more women journalists at the management level and in leadership positions, Mulia said.

“(Women in management), who have a good understanding of gender issues mainly in an Indonesian society context,” she said, “need to be supported in terms of quantity and quality.”