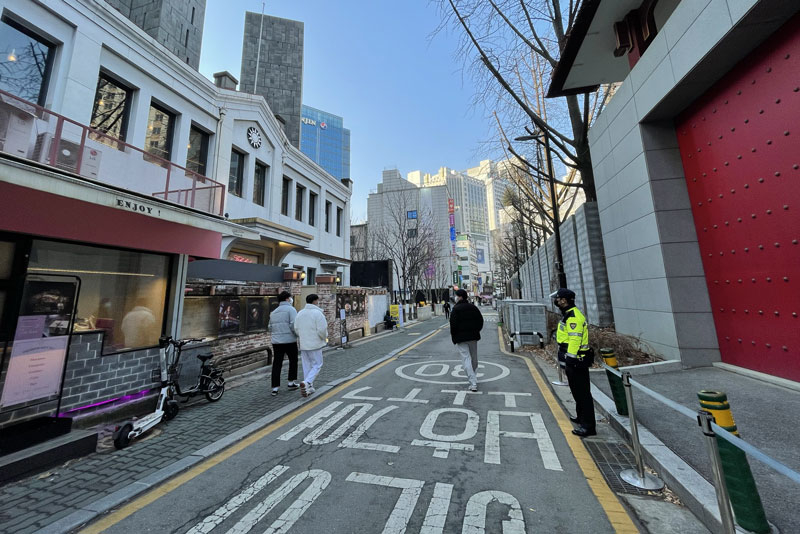 “Go back to China!,” ”Stop pretending to be Taiwanese, ok? Go to China if you claim to be Chinese!,” ”This is the Republic of Korea, not the Republic of Chinese Korea,” “Taiwan No.1, Free Hong Kong! …”

The YouTube video, which was viewed by over 10,000 individuals at the same time, received barely 234 likes and was disliked over 14,000 times. At the public hearing on the revision of the Korean nationality legislation, Kim Jaecheon, vice president of the Chinese Residents Association suffered a storm of insults from the South Koreans on the internet.

At the end of April this year, South Korea’s Ministry of Justice published an amendment to the Nationality Law to make it easier for immigrants who were born in Korea or those with a history and lineage tied to South Korea to become South Koreans citizens.

However, due to the recent Anti-China sentiment in South Korea, the Blue House received over 300,000 national petitions within a month, fiercely opposing the change of the Nationality Law. The oppositions claimed that this measure is intended to benefit specifically the Chinese community as ‘Jo Seon Jok (Korean Chinese) and Hwagyo (the Korean word which stands for overseas Chinese in South Korea) took up to 95 percent of the foreign ethnic groups.

However, “the South Korean government announced the aim to slow down the aging of the population, but is it correct to solve the problem by naturalizing Chinese people?” It may sound absurd, but are these “Hwagyo” who have lived in South Korea for generations really just “foreigners” from China?

Hwagyo in Korea, the permanent outsider

Following the end of World War II and the outbreak of civil war in China, opposing opinions and signals of disagreement emerged among many social groupings, particularly between ideologies such as socialism and liberalism. The conflict raged on until the Chinese Nationalist Party (KMT), commanded by Chiang Kai-shek, was defeated and fled to Taiwan.

A large number of Chinese refugees evacuated to Taiwan together with Chiang Kai-shek. However, other nationals of the Republic of China who failed to evacuate together also fled from mainland China to Thailand, Southeast Asia, the Korean Peninsula and other places to become local overseas Chinese in order to escape the pursuit of the Communist Party.

To sustain abroad Chinese support for the homeland and reclaim the mainland during this period, the government of the Republic of China established that as long as overseas Chinese could prove that they had Chinese ancestry, they may apply for Chinese (Republic of China) nationality, with a valid passport.

However, the capabilities of the passport obtained by overseas Chinese are clearly distinct from those of their homeland.

Due to the unique nature of Hwagyo who were unable to obtain Korean nationality at the time, many people only held this passport, which provided them with nothing more than Chinese nationality in order to live in South Korea indefinitely.

Although the majority of Hwagyo carry a Republic of China passport, this passport only allows one to become a national, not a citizen. This passport is specifically provided to overseas Chinese and is effectively a “national passport without citizenship,” hence the possessor does not have the same rights as an ordinary native Taiwanese. Hwagyo will need to get a separate visa to visit Taiwan; they do not have the same visa-free privileges as normal Taiwanese when going to other countries; and they do not have the right to permanent residency in Taiwan or other basic citizen rights. It is almost like, despite having ROC nationality, they are de facto foreigners.

Most nations, like Malaysia, Thailand, and Indonesia, made it possible for overseas Chinese to acquire citizenship at an early point, but Chinese expats in Korea who lived during the “Anti-Chinese Policy” were not so fortunate. Since the South Korean government was concerned that Chinese would take away work possibilities from their own citizens because these expats possessed economic resources in many other nations.

These are merely justifications for prohibiting Hwagyo from purchasing real estate and tightening naturalization requirements, resulting in many Hwagyo holding only Alien Registration Cards and Republic of China passports despite having been born and raised in South Korea for generations.

In reality, in addition to the first generation of Hwagyo who went from China to South Korea for war, business, or other reasons, many Hwagyo children were born and nurtured in South Korea and may never visit China or Taiwan in their lifetimes. However, because the Hwagyo cannot become the nationals of the diaspora country (Korea) unlike many other overseas Chinese in different countries, they often have a stronger identification with the Republic of China. Also, their children are generally encouraged to believe that they are “Chinese who grew up in Korea” and that they would one day return to Taiwan where their mother country, Republic of China, is situated. As a result, many new generations of Hwagyo acquire their parents’ “imagined China nostalgia.”

They come to Taiwan for their imagined motherland

Hsimou Wang, who is 20 years old and studying at National Chengchi University in Taiwan, is a fourth-generation Hwagyo born and raised in South Korea. Because of the background of a family member of the KMT Party, his family fled from Weihai, Shandong to the Korean Peninsula, and finally settled in Busan.

“Growing up in Korea, I didn’t have any specific impression of Taiwan. Despite having grown up here in Korea, somehow I still identify more with the Republic of China than Korea.” Hsimou’s understanding of Taiwan stemmed from his father’s narration since he was a child, but he wanted to visit Taiwan and enrolled the university last year to discover if the homeland is truly as his father stated.

He studied at the Overseas Chinese (Hwagyo) School in South Korea. In getting along with Koreans, he said that Hwagyo were often bullied and even discriminated against by Korean students. However, Hwagyo usually unite to protect each other, and school teachers tend to favor Hwagyo students. They have always been a peculiar group in Korean culture, never truly becoming a part of it.

“The first and second generations of Hwagyo in South Korea will declare that they are on a sojourn and that they are Chinese who will return to reclaim the mainland sooner or later. But, being the third generation of Hwagyo in South Korea, my father rarely mentions that I am Chinese, and I do not consider myself to be Chinese anymore. Instead, when I meet foreigners, I would state that I am a Taiwanese national.” Hsimou noted that his maternal grandmother had a strong faith in Chiang Kai-shek, and the majority of the older generation of Hwagyo similarly expected the Taiwanese government to bring them home.

It turns out that in recent years, due to the changes in China’s international image, the rise of Taiwanese nationalism in Taiwan, and Koreans’ anti-sentiment towards China, the identity of the younger generation of Hwagyo in Korea has also been directly affected.

The most typical experience that young Korean foreign Chinese like Hsimou have in Taiwan is that when they arrive, they discover most of the native Taiwanese who did not retreat to Taiwan with Chiang Kai-shek do not consider themselves to be Chinese at all. In reality, with the exception of the Chinese who fled to Taiwan with Chiang Kai-shek, the indigenous of Taiwan had been under Japanese control for a long period prior to the Chinese Civil War. Taiwan was still a Japanese territory when the Republic of China was established. These inhabitants made up the majority, accounting for more than 80% of Taiwan’s population; they naturally do not see Hwagyo as members of their community. What’s worse, when Hwagyo arrived in Taiwan, they were mainly treated as Koreans.

It was already very tough to get to Taiwan, but to realize the locals did not regard themselves as the members of the community was most devastating, they also tried out China, but they would be treated as Taiwanese. Finally they would return to Korea, facing the same identity dilemma.

Why not just become a “Korean?”

South Korea is a monoethnic state with a nationality law that determines citizenship based on blood ties. As a result, despite the fact that the history of Hwagyo dates back more than a century, it is still difficult to assimilate into Korean culture.

But even so, there are many unique Hwagyo cultures created in Korean society, such as the National Cuisine Jajangmyeon and Champon, which Koreans are proud of, are actually the inventions of Hwagyo, not to mention historical facts such as fighting Japanese colonization with the Korean nation and voluntarily assisting in the Korean War, which demonstrated that Hwagyo have long been a part of Korea.

But so far, most of Hwagyo still regard the Republic of China as the “motherland” and the idea that they are “orthodox Chinese”. The concept has been passed down from generation to generation, even the new generation hesitate about engaging the legal act or process to acquire Korea citizenship

The disagreement over the change to the Korean Nationality Law is also evident, and many Koreans are unaware that the Hwagyo who have resided on the Korean Peninsula for more than a century are not the same as the modern Chinese they now reject. It’s no surprise that South Koreans, who typically consider Taiwan as a separate entity from China, believe that Hwagyo who claim to be Chinese yet have Taiwanese passports are “pretending to be Taiwanese.”

Due to the general pressure from public demonstrations, the South Korean government has also halted the change of the legislation, and it appears that there is still a long way to go until Hwagyo are accepted by Korean society.

Today, many young Hwagyo are beginning to think that whether they choose to live in Taiwan to readjust to Taiwanese society, or to just naturalize in South Korea, where they were born and raised are all better options than not knowing their own identity.

Even if they find out that Taiwan is not the “free China” described by their parents, and they are not “Korean” by blood, but as long as they identify with their own identity and are willing to accept the place where they live, it seems to be a more humane and reasonable idea.