Amid Hong Kong’s glitz and glamor, a ‘ghetto’ hub of cultural diversity lies 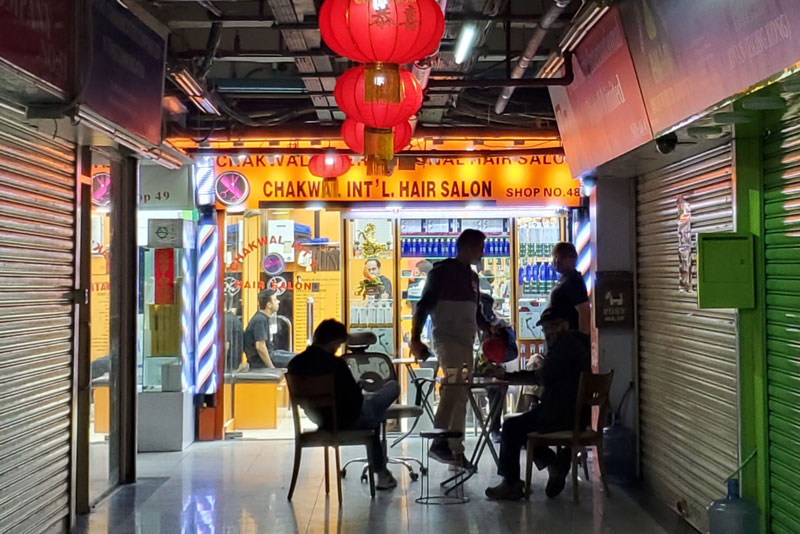 On a Sunday morning in January, Dawit Kahsay brought a group of four people on a tour of Chungking Mansions. The Eritrean, who works with a social enterprise, Africa Center, pointed at a hairdressers on the first floor.

“The reason I started coming to Chungking Mansions was for the barber,” Kahsay said. “It’s very hard to find the right barber in Hong Kong if you’re African because [local hairdressers] generally don’t know how to handle Afro hair.”

After his first trip to the building, he began making new friends there and soon found himself a regular at many of the restaurants. “It’s a very interesting place for me,” he said.

One of the stops along the tour was a busy ground-floor eatery, where a South Asian man ferried plates of dosa—a thin, crispy Indian-style crepe—and piping dishes of curry to tables of hungry customers.

Greeting the tour group, the waiter stopped to prepare Masala chai, expertly “pulling,” or pouring the tea back and forth between two containers from height. The process introduces air into the beverage, creating its signature smooth finish.

The tour group, made up of two Hongkongers, a mainland Chinese graduate student and a woman from France who just moved to the city for work, marveled at the waiter’s skills before trying the tea.

“There are different types of people who join us,” said Kahsay, who has been holding the bi-weekly tours at the building for over a year. “Some are locals who have been living in Hong Kong their whole lives, but have never been [to Chungking Mansions] before. Everybody leaves the place very happy, excited and willing to come back again.”

Opened in 1961, Chungking Mansions is a hub of cultural diversity in racially homogenous Hong Kong. The city is around 92 percent ethnically Chinese, according to the 2019 government census results.

Chinese University of Hong Kong anthropologist Gordon Mathews, for whom the building was the subject of years-long cultural study, said his examination of hostel logs suggests that around 120 nationalities have passed through the doors of Chungking Mansions.

Flexible visa policies and the city’s proximity to manufacturing hubs in southern China have enabled the building’s “low-end globalization,” Mathews wrote in his book “Ghetto at the Center of the World.” Traders, many from South Asia and Africa, use Chungking Mansions as a base to peddle goods—from phones to watches to bags—globally.

Among the stores on the building’s first floor is Simon Sheikh’s electronics shop selling smartphones and video consoles. “This is my family business,” the 35-year-old Bangladeshi said.

“I spend most of my time in Chungking [Mansions], working,” he added. “This place is my second home.”

He and his family moved to Hong Kong 17 years ago, but they have since emigrated to Dubai.

“I used to visit them before Covid-19,” he said. “I used to travel to different countries for business, but now no more. We just ship the phones to them.”

Chungking Mansions is also a refuge for Hong Kong’s asylum seekers, some of whom stay in the building’s inexpensive hostels. On the 16th floor, NGO Christian Action runs the Center for Refugees, which assists asylum seekers in finding accommodation and navigating the government’s byzantine refugee application process.

In fact, Chungking Mansions came to the world’s attention in 2016 as the place where American whistleblower Edward Snowden lived briefly while fleeing U.S. authorities.

Snowdon’s lawyer, who works closely with refugees, convinced a Sri Lankan family seeking asylum in Hong Kong to take Snowden in after he leaked confidential intelligence from his former employer, the U.S. National Security Agency.

Although Chungking Mansions is beloved by ethnic minorities, the local community does not view it in the same light.

Many Hongkongers see the mid-rise building as the gritty underbelly of the city—a place their parents warned them not to set foot in. The shady reputation is reinforced by occasional incidents of drug-related crimes and violence, compounded by race-tinged stereotyping of the population’s dark-skinned minority.

In contrast, Chungking Mansions is where Zimbabwean Innocent Matanga feels most at ease.

“I feel safer here than on the MTR (Mass Transit Railway),” Matanga said. “It’s about the feeling of not having eyes judging you. I don’t feel like I’m carrying the weight of the whole black nation on my shoulders.”

Fleeing political persecution in Zimbabwe in 2013, Mutanga sought asylum in Hong Kong, a place he could enter visa-free. When he landed, an airport immigration officer asked the then-22-year-old if he was headed to Chungking Mansions, known as a first stop for many African refugees. With no plans for where to go, Mutanga took the officer’s inadvertent advice.

Eight years after crashing at a hostel in Chungking Mansions, Mutanga now has a career in finance following a bachelor’s degree at a local university.

Still, he returns to Chungking Mansions often to catch up with friends. He also founded Africa Center, a group that educates local communities about African culture.

“Some people point to Central (business district) as Hong Kong’s center,” Mutanga said. “I’m like, ‘nah, that’s periphery.’ For me, Chungking Mansions is the center of Hong Kong. It’s my anchor point.”